Yesterday someone copied me on a tweet responding to an Honest John article, telling him he was giving out the wrong advice. So I thought I’d take a look, and see what a he’s said… 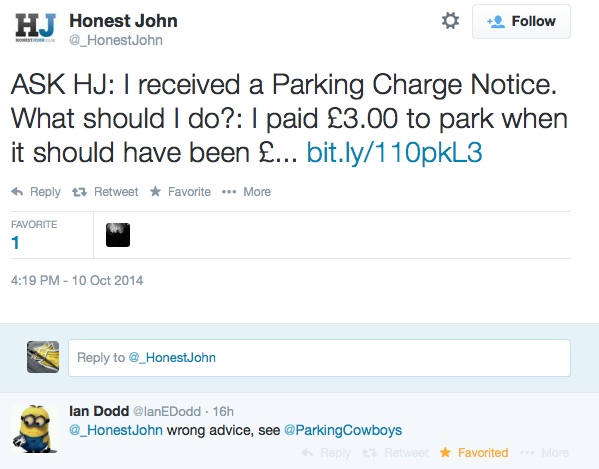 The motorist describes their situation as follows:

I paid £3.00 to park when it should have been £3.20 in a car park. The parking ticket quotes a breach of contract code – parked after the expiry of the paid time and they want £100 for a parking charge, reduced to £50 if paid within 14 days. What are my rights?
Asked on 10 October 2014 by HarveyB

To which John replies:

Your POPLA appeal will fail on the facts because you paid £3 when you should have paid £3.20, and you will then be subject to the full charge of £100. Your only possibility of getting off is if the VAT element has not been correctly addressed, which depends on whether RPC parking is claiming damages (which are nit subject to VAT) or a parking charge (which is).

John’s response is lazy and it is wrong. This question cannot be answered in two sentences. I suspect HarveyB‘s question may have actually been longer with more detail, but since he’s providing responses publicly, the risk is that other motorists will be misled.

My main issue with John’s response is that he says “Your only possibility of getting off”. No, John, it’s not the only way. And actually, I think it’s unfair to call it “getting off” which implies that the £100 claim is valid. Since the claim is for breach of contract as oppposed to a contractual charge (“If you break the terms, I want £100 damages” vs “You can park for as long as you like for £100”), historic case law says that the damages must be demonstrated to be a genuine pre-estimate of loss. Now we’ve yet to see a parking company demonstrate how they can ever show £100 loss. In this case, the motorist has underpaid by 20p – TWENTY PENCE; it simply defies logic to claim this has caused the parking company £100 – ONE HUNDRED POUNDS – of loss. Appeals to POPLA for parking charges as a result of contractual breach are almost always upheld on the GPEOL point. Since this is a pay car park (as opposed to free), it’s actually even harder for the parking company to demonstrate any more than 20p loss since the signs clearly say what you owe!

However, even this is not HarveyB’s only way of “getting off” – or as I would put it – “defending this absurd and frankly unfair claim”. There are the other aspects to explore. For example, does the contract support the claim? Does it actually say that a £100 charge is payable for underpayment? Surprisingly, it isn’t a given. If he were to post up details on one  of the forums, he would soon get an expert assessment.

If I was HarveyB, I would also make an offer to the parking company to reimburse them for the amount underpaid, plus a small amount as a good will gesture – £5, £10? What this does is that it shows that the motorist has acted fairly and reasonably. If the parking company did take him to court, this may limit any costs awarded against him because he can clearly demonstrate he’s attempted to settle fairly without wasting court time.

I should also add that I’m not suggesting John is dishonest. However the title Honest does give the impression that he knows what he’s talking about; and in this case I don’t think he does.

Anyway, best of luck to HarveyB, and John, stick to second hand cars, or whatever it is you do.