Earlier this week I heard rumours that a solicitors firm had been appointed to assess the outstanding 3,500 so called ‘GPEOL’ POPLA cases. I was very much surprised at the name of that solicitor, but I will come back to that after recalling some of the background.

These 3,500 cases were caught up in the unfortunate timing of the ParkingEye Vs Beavis case and the handover of POPLA from London Councils to Ombudsman Services. As the Beavis case at the Supreme Court was expected to provide clarity on the issue of genuine pre-estimate of loss (GPEOL) it was agreed that London Councils would put these cases to one side and hear them once the outcome was known. During that period POPLA switched providers. Unfortunately these cases didn’t have anyone to assess them; old POPLA had been disbanded, so would have had no capability, and (presumably) these cases didn’t form part of new POPLA’s contract.

The British Parking Association therefore needed to find a service provider to assess them. The BPA intended to have them assessed only on the basis of GPEOL on the basis that the cases had been put into the ‘GPEOL pile’. However, there appears to have been a misunderstanding between the BPA and old POPLA. Old POPLA had not properly assessed them, rather they had taken a cursory read and put them in the GPEOL pile if GPEOL was likely to be relevant to the outcome.

Independent Scrutiny for Parking Appeals on Private Land (ISPA) – the independent board that oversees POPLA – objected to the cases only being heard on the basis of GPEOL. In an open letter, its chair Nicola Mullany objected reasoning that:

In the letter ISPA alluded to ‘the considerable pressure’ that the BPA is under regarding members ‘forum shopping’ (e.g. joining the ATA that is best commercially). Since the appeals process is funded by members, it seems likely that the BPA is having to balance the scope (and therefore cost) of the appeals process against their commercial and financial interests (e.g. their bank balance, ongoing retention of members etc). Back in October last year Parking Prankster blogged about the financial dispute between London Councils and the BPA which might help explain why there is such pressure on hearing these appeals as cheaply as possible.

Another point of note from the ISPA letter is the quite pointed comment about POPLA being seen to be independent, a theme we will return to later.

ISPA feels, however, that this decision would severely weaken the credibility of PoPLA as we don’t believe a scheme – other than one controlled by the operators – would come to such a decision.

An exchange of open letters followed. Initially the BPA refused to back down, causing a further open letter from ISPA, which then finally resulted in the BPA agreeing to hear the cases in full. As an aside, this process does show the importance of independent scutiny in this sort of industry – forcing businesses to act against their commercial interests.

So having got through the ‘right hassle’ of establishing the basis of the appeal service required, the 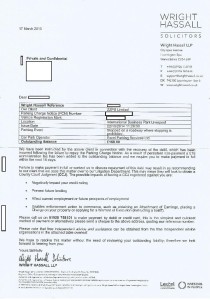 BPA confirmed that the solicitors firm Wright Hassall had been selected. Now, on the face of it, a respectable firm of solicitors should be a good choice to hear parking appeals which deals with quite complex contract law. However, the name Wright Hassall is one familiar to motorists since they act in a debt collection capacity to enforce unpaid private parking tickets. Attached are some example letters from Wright Hassall and Quantum Debt Recovery, their subsidiary that specialises in debt recovery.

It seems that frequently, they are acting on behalf of ZZPS, itself a debt collector and BPA member. ZZPS is owned by Gary Osner, a one-time director of the BPA, and is reportedly a ‘phoenix company’ for Roxburghe debt collectors after it lost it consumer credit licence and went into administration in 2014. 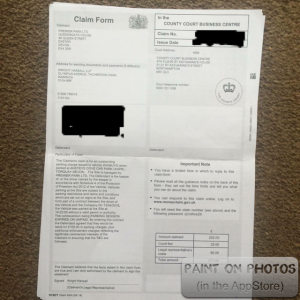 There is also evidence that suggests Wright Hassall are also representing parking companies in county court claims to enforce parking charges, as shown in the picture where they are named on a claim form for Premier Park.

Wikipedia defines a conflict of interest as follows:

A conflict of interest is a situation in which a person or organisation is involved in multiple interests, financial interest, or otherwise, one of which could possibly corrupt the motivation of the individual or organization.

The presence of a conflict of interest is independent of the occurrence of impropriety.

I should underline – this is not to say that either the BPA or Wright Hassall have, or plan to, behave improperly. We are simply highlighting the fact that by its definition there is a conflict of interest.

Back before October 2012, there was no independent appeals service for private parking tickets. Parking companies could offer an appeals service, but it was heard by themselves. Clearly, from a financial perspective it was not in their interests to spend money on an appeals function, and nor was in their interests to cancel tickets. There are no statistics that state what percentage of tickets were upheld on appeal, but anecdotal evidence suggested successful appeals occurred as rarely as faeces from wooden play horses (as an aside, hens can in fact grow teeth).

As such, when the Government introduced the Protection of Freedoms Act in 2012, there was a condition that the appeals process (i.e. POPLA) is completely independent. For reference, the Government’s official guidance can be read here. Now, given that we have established relationships between Wright Hassall and companies in the private parking industry, can they be considered completely independent? Could they conceivably have any interest in the outcome of cases? The use of the word completely does not allow a lot of wriggle room – there can be no link.

The other factor to consider as whether the POPLA service not only acts as independent, but is seen to be independent. Again, given the relationships that are known in the public domain, how can a company that performs debt collection activities and legal representation for private parking charges, also be seen to be impartial in determining appeals for private parking charges?A final point on this is that one of the responsibilities of ISPA is to approve the selection of service providers for POPLA. One wonders if ISPA have in fact approved this selection, and assuming they have, were fully aware of their previous involvement with the industry?

In conclusion, it seems to be a poor course of action the BPA have chosen to take here. Whilst we and others have been critical of POPLA in the past, the ‘old POPLA’ demonstrated independence from the BPA and the parking companies. As mentioned above, ISPA too clearly are challenging the BPA in their operation of POPLA.

However, by appointing a party that has commercial relationships with parking companies and is itself involved in the enforcement process, that reputation, and that of the BPA, risks being severely compromised. Further, one questions whether by appointing this company, the BPA are meeting the Government’s requirement of a completely independent appeals process?

Should the BPA, ISPA, or Wright Hassall wish to respond to this, I will happily publish their response in full.