Patrick Troy, who was Chief Executive of the British Parking Association until mysteriously resigning in February, received a suspended jail sentence this week for taking ‘up-skirt’ pictures of women on public transport. The BPA’s original press release said he was resigning for ‘personal reasons’, not mentioning the criminal case. Westminster Magistrates Court sentenced him to 18 weeks imprisonment, suspended for two years for ‘outraging public decency’. 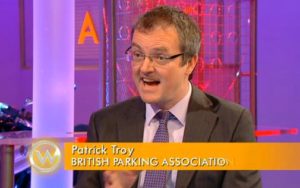 He also received an indefinite Sexual Harm Prevention Order (SHPO), which prohibits him from taking pictures on public transport. Mr Troy was the face of the BPA, regularly appearing on Watchdog and BBC Radio as an apologist for the parking industry.

According to the write up in the Telegraph, the police also tried to include a ban on sitting opposite women he didn’t know on public transport, but this was omitted from the SHPO. The events where Troy was caught were described in the Telegraph:

“The defendant was seen holding his phone at an angle below her skirt and the witness saw the red recording light on and a clear image of the skirt and back of the woman’s legs,” he said.

“The witness challenged him at platform eight [of Vauxhall Station] and followed him onto the train where he was seen with his hand in his right pocket fidgeting with something. It is thought he was trying to get his phone out to delete the image.

“The police were called and when the train stopped at Clapham Junction he was arrested. A number of other images were found on the phone.”

In addition to the suspended jail sentence and SHPO, Troy was ordered to pay £85 costs and £115 victim surcharge. BPA members regularly charge £100 for offences such as overstaying in a free car park, parking over a line, or not displaying a permit, so in comparison, it seems financially Mr Troy has got off lightly for this criminal offence.

The BPA, who run the Park Mark scheme which promotes safety in car parks, have yet to install a full time replacement for Mr Troy.