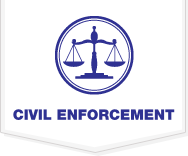 Civil Enforcement Ltd (CEL) are a private parking company operating in the UK. They operate on privately-owned land, such as supermarket car parks, retail parks, and trading estates. As with the majority of private parking companies, they derive their income from issuing Parking Charge Notices; this is the industry term for parking tickets. Parking Charge Notices (PCNs) are issued for breaking the terms and conditions, such as overstaying, parking outside of a marked bay, or not purchasing a ticket. For more information on PCNs, take a look at our page.

Civil Enforcement use both Automatic Number Plate Recognition (ANPR) and parking attendants to issue tickets. ANPR technology allows Civil Enforcement to automatically issue tickets to motorists when the system detects that the car has stayed in the car park longer than it is allowed. More information on ANPR can be found on this page.

There may be various reasons for this, such as optimising finances and tax. However, when tickets are issued (either Notice to Keeper or Notice to Driver), these are issued under the Civil Enforcement name.

CEL are a member of the British Parking Association. Membership of the BPA’s Approved Operator Scheme enables them to request keeper data from the DVLA. They need access to the DVLA’s data to lookup the keeper data to allow them to enforce payment of unpaid parking tickets.

Where do they operate?

Civil Enforcement are known to operate in the following places:

What do I do if I get a ticket

If you get a Civil Enforcement Parking Charge Notice, the easiest way to defeat it is by an appeal to POPLA, the independent appeals service for the BPA’s Approved Operator Scheme. Before October 2012, when the Protection of Freedoms Act was introduced, the typical advice was to ignore private parking tickets. However, that is no longer recommended since certain parking companies now try to enforce tickets through the county court. Instead there are arguments to use in your independent appeal that will give you a good chance of getting the ticket cancelled.  Have a look at the following pages for information on how to appeal your Civil Enforcement ticket:

Civil Enforcement are a very litigious company, issuing hundreds if not thousands of claims per year. They are known to issue claims for historical parking tickets (up to six years in the past) when many people were generally ignoring them. CEL have found this to be an extremely profitable operation since many people pay up when faced with stamped court papers (e.g. an N1 claim form). However, those that have fought their tickets have been able to defend themselves; CEL most often do not actually turn up if the case reaches court. More information on legal enforcement of parking tickets can be found here.

If you have received a court claim from CEL our recommendation is to:

Other notable information about Civil Enforcement

The following are other notable resources on CEL:

CEL don’t turn up to court