The private parking industry is a very emotive subject. Every week there are dozens of stories in local and national news about motorists being unfairly treated (here, here, and here for example). The industry counters this by claiming that enforcement is necessary to protect land owner rights, and land owners employ them to do so.

There is little evidence to back up the claims about the effectiveness and fairness of private parking enforcement. Unfortunately, significant decisions, such as in the Beavis Vs ParkingEye case, are being influenced by anecdotal evidence and conjecture. To any reasonable person, making sigificant decisions without hard evidence would be troubling; the outcome could have far reaching consequences, potentially extending outside of parking.

On ParkingCowboys.co.uk, we’re well positioned to get feedback from motorists who have received tickets from private parking companies. This is because having received a ticket, one of the first things people do is to ‘google’ it. As such, we thought it would be a good idea to capture details about the parking tickets issued and analyse the data.

Arguably by running the survey through a website this may have some influence on the results. For example, the site may rank better against some search terms than others. As such we cannot guarantee that there will be a perfectly representative spread of tickets by parking company, by ticket reason, or by car park type. Having said that, we would hope it to be at least indicative of reality. Regards other questions (genuine user, awareness of rules, likelihood of using car park again), there is no obvious reason to doubt these responses are broadly representative. Further, the data collected is not personal, so there is no obvious reason that truthful answers would not be provided. This was reinforced by a statement at the top of the survey asking people to be truthful.

This survey was conducted on visitors of ParkingCowboys.co.uk between 16th August 2015 and 30th August 2015. Users were asked to complete seven questions about their parking ticket: 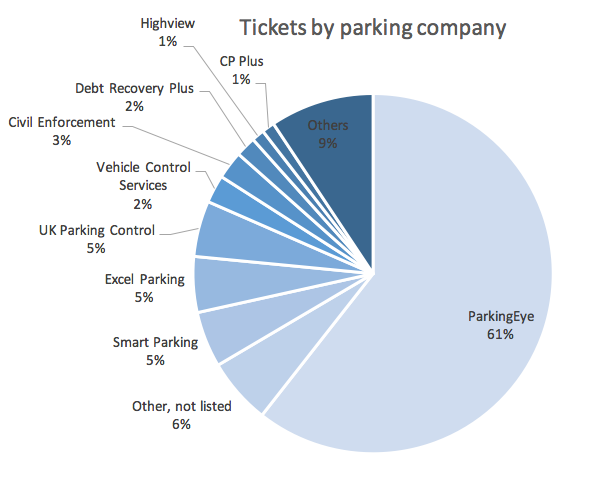 As one would expect, ParkingEye tickets received the greatest number of responses with 61%. ParkingEye are known to be the largest private parking company, although they probably don’t issue 61% of private parking tickets. To the author’s knowledge there is no record of tickets issued by parking company, so it is difficult to validate this. To make sure that the results are not distorted by the ParkingEye responses, we shall consider results with and without ParkingEye where appropriate. 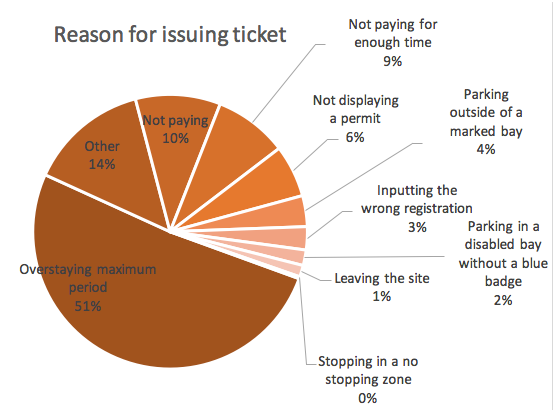 Looking at the chart, by far the greatest reason for issuing a ticket is overstaying the maximum period in a free car park (51%). The volume of these tickets is expected due to the prominence of ANPR systems monitoring maximum stays, which are very efficient and operate 24 hours a day. Ticket types that require humans to issue, such as leaving site (1%) and parking outside of a bay (4%), represent a much lower proportion of the tickets. 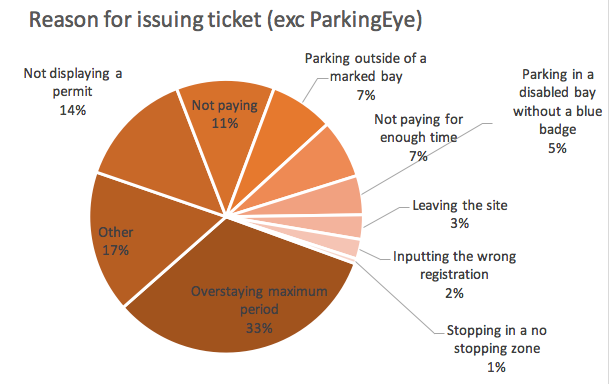 When excluding ParkingEye, the proportion of overstays reduces significantly, down to 33%, although still the biggest reason. This makes sense, since ParkingEye’s main business model is to enforce via ANPR, which is predominantly used to catch people overstaying. 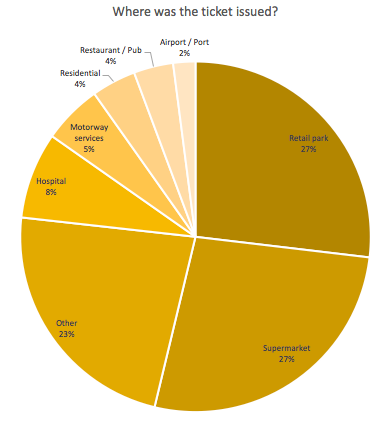 By far, retail locations (retail parks, supermarkets, and restaurants) are the prime locations for issuing private parking tickets with 58%. Interestingly, hospitals account for 8% of tickets in our survey, indicating it is a reasonably large source of income for parking companies. 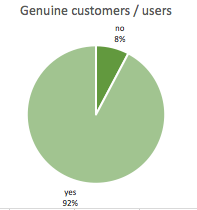 This question asked the motorists whether they were a genuine user of the facilities; e.g. were they using the shop for which the car park was provided. A massive 92% said they were, with only 8% admitting they were using the car park for other reasons. 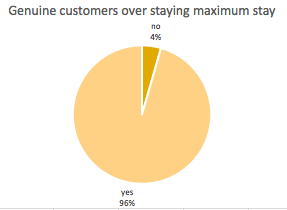 When looking at only the tickets issued for overstaying the maximum stay (as is popular in retail parks and supermarkets), that percentage jumps up to 96%. 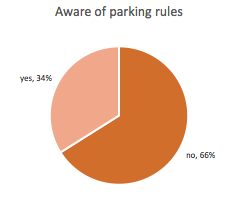 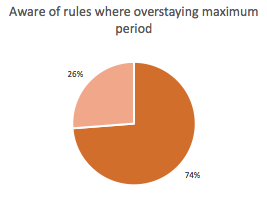 Again, looking at overstays only, the proportion not aware of the rules increased to three-quarters.

Impact of issuing a ticket 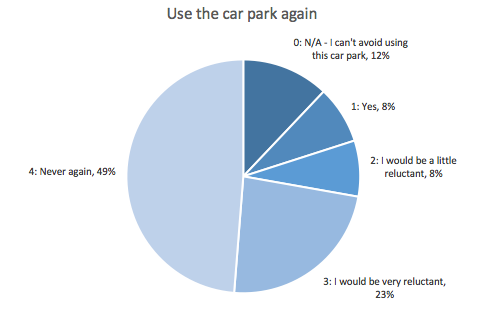 Receiving a parking ticket is usually annoying to the recipient, especially if they feel they have been hard done by. In our survey half of people said they would never use that car park (and by inference the facility it is provided for) again. 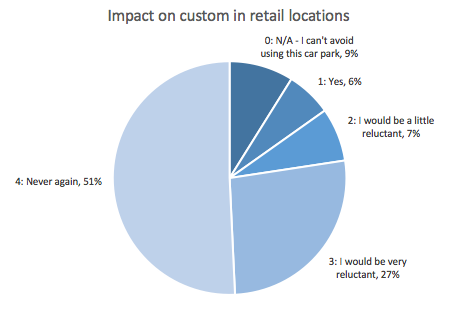 When considering retail locations (i.e. the places where they should care about return custom!) the numbers increased with 51% saying they would never go there again, and 85% saying it would impact their custom to some extent.

Since two-thirds of motorists ticketed were not even aware of the parking rules, it’s clear that communicating the terms using the existing types of signage is not adequate.

Whilst the ATA codes of practice specify what signage should be displayed, it is clearly not adequate given such a large number of people didn’t even notice it. There has been much criticism in the past of the signage with lettering far too small, signs too high, and poor use of language; perhaps this is the consequence? The Plain Language Commission has discussed this issue at length.

When considering only tickets for overstaying a maximum period the situation is even worse with three quarters unaware of the rules. The author suggests this is probably because in a ‘free’ car park, the motorist is expecting it to be just that. In ‘free’ car parks, it would perhaps be prudent for greater levels of signage, or some other system to bring attention to the motorist. Right now the situation seems to be simply unfair.

The apparent theory of the maximum stay term in a free car park is that motorists would take heed and leave the car park before the limit is up. As we note above, in such car parks three-quarters of ticketed motorists did not even know there was a limit, so the scheme is not effective at creating that turn over. Of the motorists not ticketed, it is not clear whether they left because they heeded the rule, or that they simply didn’t need that much time? The author would suggest it is most likely the latter in the majority of cases.

Maximum stays are also too blunt an instrument for the variety of people in society. We all know that people take different amounts of time to use shops, either because of our age, who is accompanying us, or our physical state. To put in place an arbitrary limit would seem to unfairly treat those that need more time; older people, parents with young children, and the disabled.

It is quite clear from the results that ticketing creates a lot of ill feeling. In retail locations, in 85% of cases, it will impact the level of future custom from that motorist – and over half say they will never use that shop or restaurant again.

Free management of car parks is not really free

The British Parking Association regularly state that car parks cannot be managed for free and that someone must pick up the costs. On the face of it that cost is passed onto those customers that break the terms and conditions, either knowingly or, more often than not, unknowingly. The fairness or not of this model can be debated, but actually there is likely a hidden cost for the landowner.

Private parking contractors often offer their services for free, or even pay the landowner to ticket in their car parks. However, when there is such ill feeling created by such schemes, with half of those customers saying they will never come back, the loss in revenues will have an impact on those businesses.

Perhaps the old adage of “if something sounds too good to be true, it probably is” is correct in this instance.

Of the people surveyed, 8% say they were not genuine customers – e.g. those people who park in a car park for convenience, and not to use the facility for which it is provided.

The industry regularly states that landowners have the right to protect their land from abuse, and we would not disagree with that. However, from our results it seems that the blunt schemes that are going on now are hitting genuine customers at a rate of 9 to 1!

It may be that more intelligent schemes are needed to curb abuse. For example, by ticketing cars that are known to break the the car park rules regularly, thus reducing the collateral damage to genuine customers.

Thanks to everyone who took part in the survey. If you have any comments on the above, please feel free to contact us.